“Budapest, once an avant-garde centre of design, art and architecture has lost its position of international prominence and this programme represents an attempt to analyse, reinterpret and revivify a segment of Hungarian culture through the study of the physical, formal, industrial and intellectual remains of a landscape of production. Blood Mountain is in an extraordinary position to foster such an exploration: the very villa itself is a reminder of an era when Budapest was one of the fastest growing cities in the world, a cosmopolitan hub of intellectual, literary and artistic discourse; and the international experience and outlook of its curatorial team also reflect and refract that moment of concentrated culture and openness. Stories from Central Europe is an ambitious exploration of the sketchy, messy and fascinating interstices between the history, present and future of Hungarian culture.”

– Edwin Heathcote, architecture and design critic of The Financial Times, London and trustee of Blood Mountain 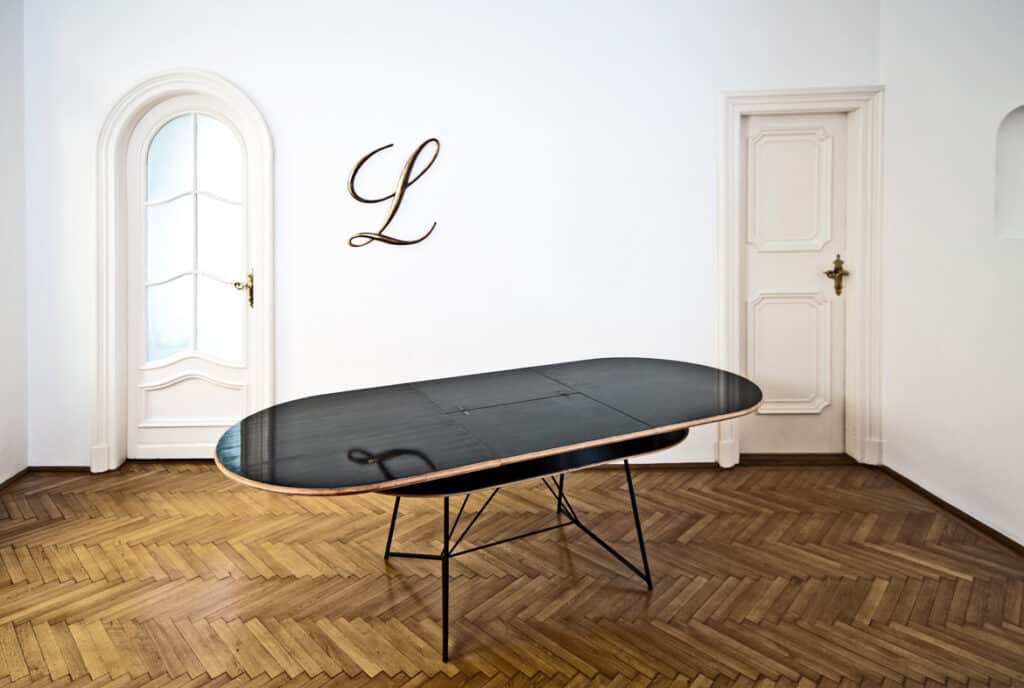 Stories from Central Europe was an exhibition and affiliated public programme produced by Blood Mountain Foundation for the 2011 Budapest Design Week. It celebrated the region’s unique design heritage and addressed its future creative potential with an international line-up of contributors.

The theme of the eighth Budapest Design Week, ‘Couleur Locale’ (Local Colour), was inspired by the 19th century French literary movement of Romanticism. Steeped in social realism and revised notions of nationhood, diversity and cultural identity, it encouraged writers to express dissatisfaction with contemporary issues and proposed new alternatives inspired by foreign cultures and earlier periods.

The eponymous exhibition and public programme took place during the Design Festival at the premises of Blood Mountain Foundation: Vérhalom utca 27/c, Budapest 1025, Hungary. Entry was free and events took place in English.

In light of the European Union’s increasing cultural homogenisation and globalisation’s eradication of artisan skills, it was a poignant topic for contemporary Central Europe, where the remnants of creative thinking and specialist production skills still resided at the time of the project (2011). All objects were found in Budapest at the flea market with contemporary elements produced by local artisans from locally sourced materials under the creative direction of Tom Sloan and produced in consultation with Ivan Moschlyak, Budapest’s leading antique and modern furniture dealership.

The former dining room of Blood Mountain villa presented The Luxus furniture range. The namesake object was a transparent glass sheet with silver leaf detailing originally conceived as the wall decoration of Budapest’s most prominent department store during the Austro-Hungarian Monarchy and known as The Luxus (‘The Luxury’). 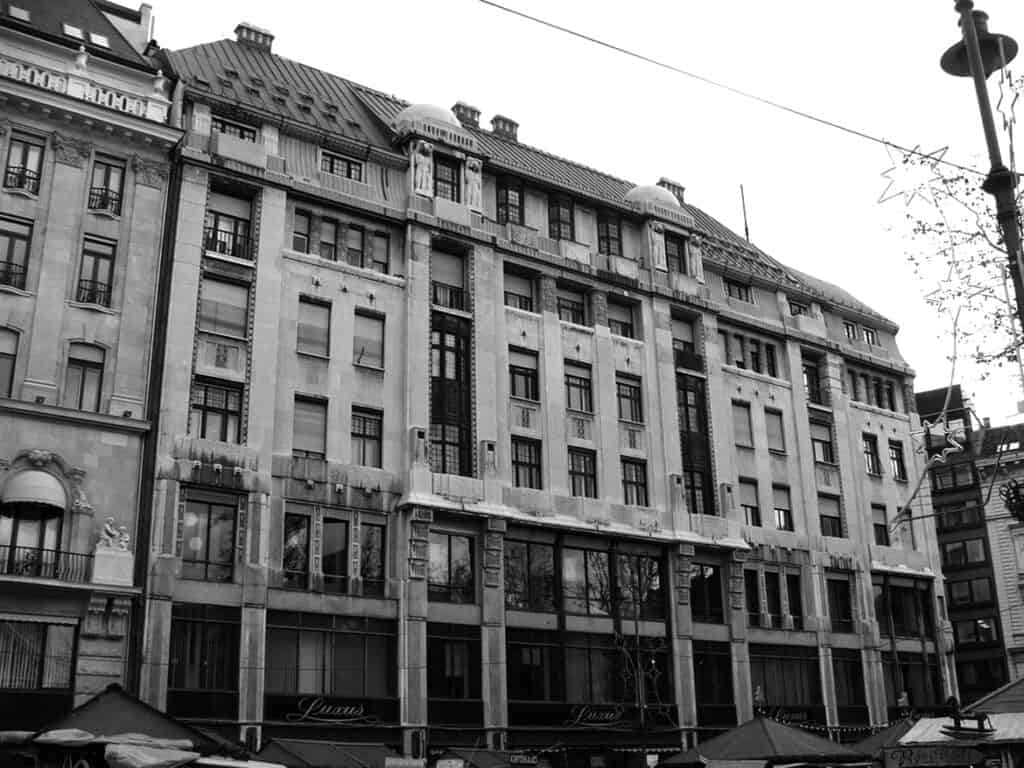 Completed in 1911, the opulence and exclusivity of The Luxus Department Store matched the appeal of its contemporaries: Harrods in London and Galleries Lafayette in Paris, and enjoyed Budapest’s appeal as the ‘Paris of the East’. Its design also reflects Budapest’s affinity with Vienna’s creative zeitgeist of the early 1900s, namely the Wienner Werkstätte and the Secession movements. The Luxus’ original interior was first re-appropriated in the 1950s, when the socio-political climate demanded a more subdued, modern interior; and on several occasions since 1989 as contemporary developers and retail operators favour a more contemporary aesthetic. With the simple gesture of turning the panel from a vertical and predominantly decorative purpose to a horizontal and functional position, the glass detail here becomes a table surface. Married with a simple custom-made steel leg, it regains its original splendour in a contemporary context. 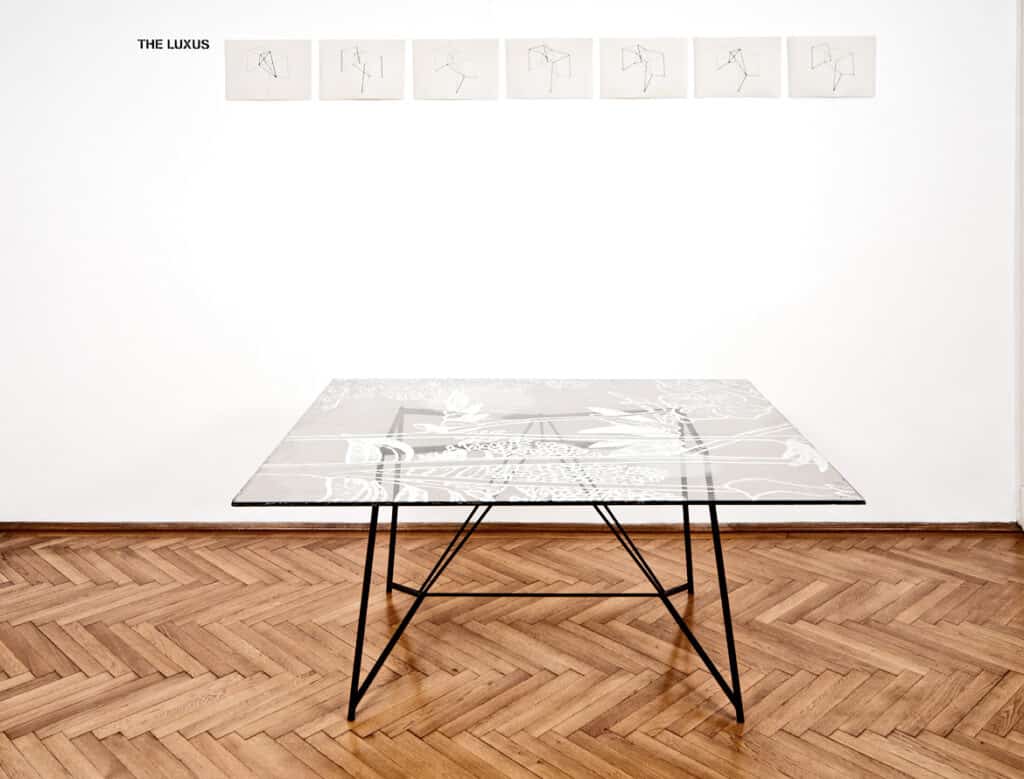 The story of Luxus is commonplace in Central Europe, where the socio-political conditions changed on many occasions during the 20th Century. By consequence, the volatile cultural climate also affected the fate of family heirlooms. To commemorate a subsequent chapter in Hungary’s history and to highlight the flexibility of the new steel leg system, a socialist era family dining table was retro-fitted with the same leg unit as part of The Luxus Collection. 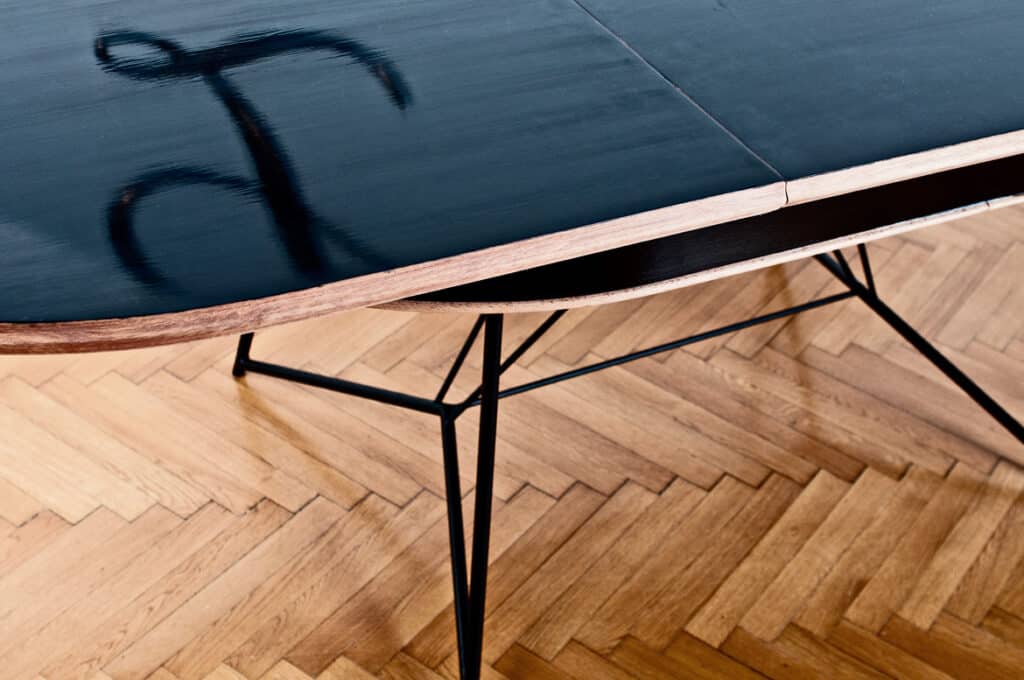 Reworked from a high-gloss polyurethane finish and stained timber aesthetic to a more subtle play between black finishes and a shade of natural tan peel; its former impression as a ‘comrades chic’ object was replaced by the understated simplicity of the Bauhaus and post-war Danish design.

The Luxus Collection was completed by a series of original drawings by Tom Sloan for the contemporary stainless steel table legs, and the original hand-crafted street-side logo (“L”) of The Luxus Department Store. 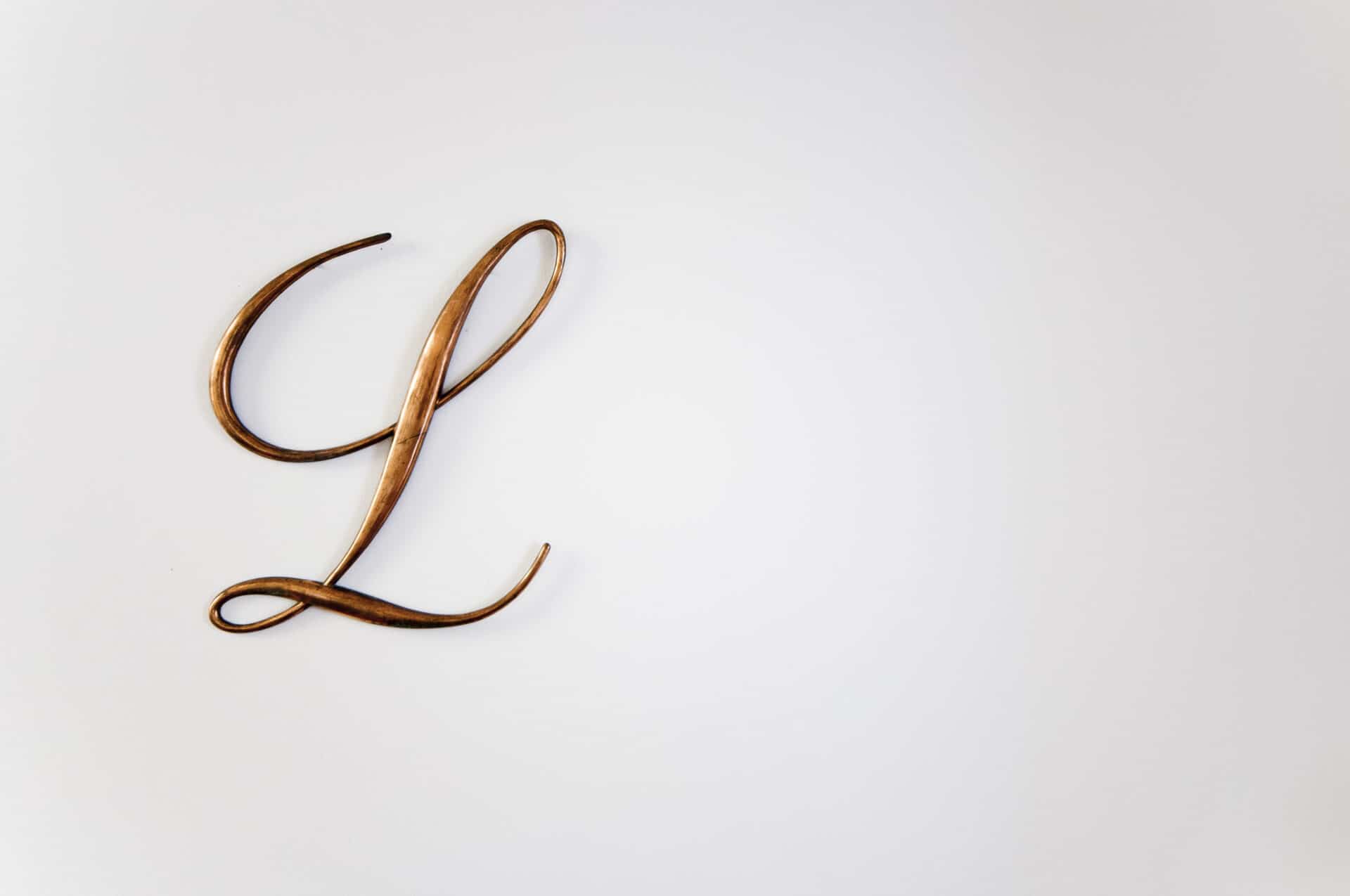 The setting of Blood Mountain’s associated public programme of talks and workshops was the organisation’s former Salon, which in the exhibition was home to The Sputnik lamp family. The collection follows a similar approach to The Luxus in celebrating a marriage between old and new. Lighting fixtures from former industrial, commercial and domestic uses were re-appropriated with subtle interventions and a simple electronic system.

“The Double Agent” comprised two identical industrial lights found in different states of disrepair at the Ecseri Flea Market in Budapest and restored to varying states to highlight the diverse possibilities of their form. On the right, the original patina remained untouched, while the object on the left was stripped bare with an abrasive chemical treatment. Refitted with large transparent light globes and new fabric cables, the mystery surrounding the pair’s provenance stood as a reminder to the doubt and secrecy that characterised the Cold War. 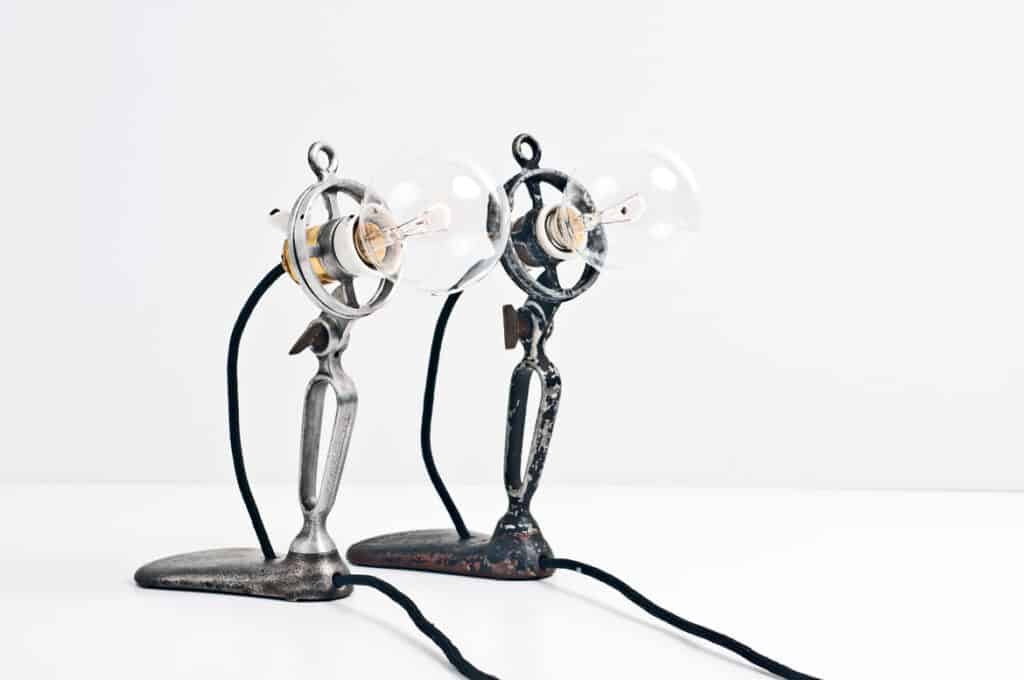 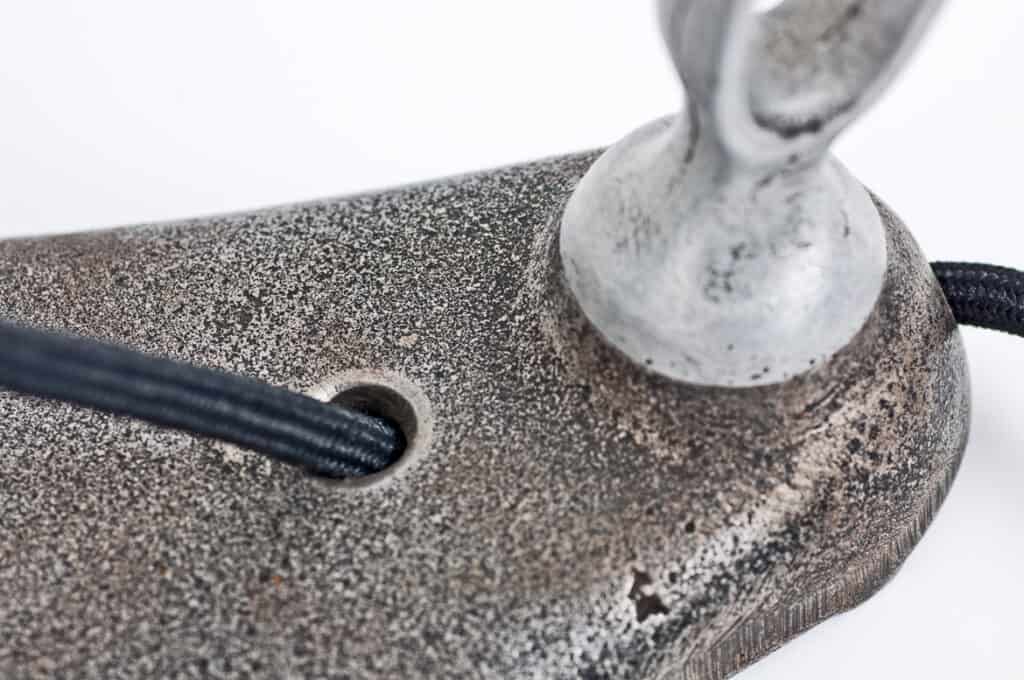 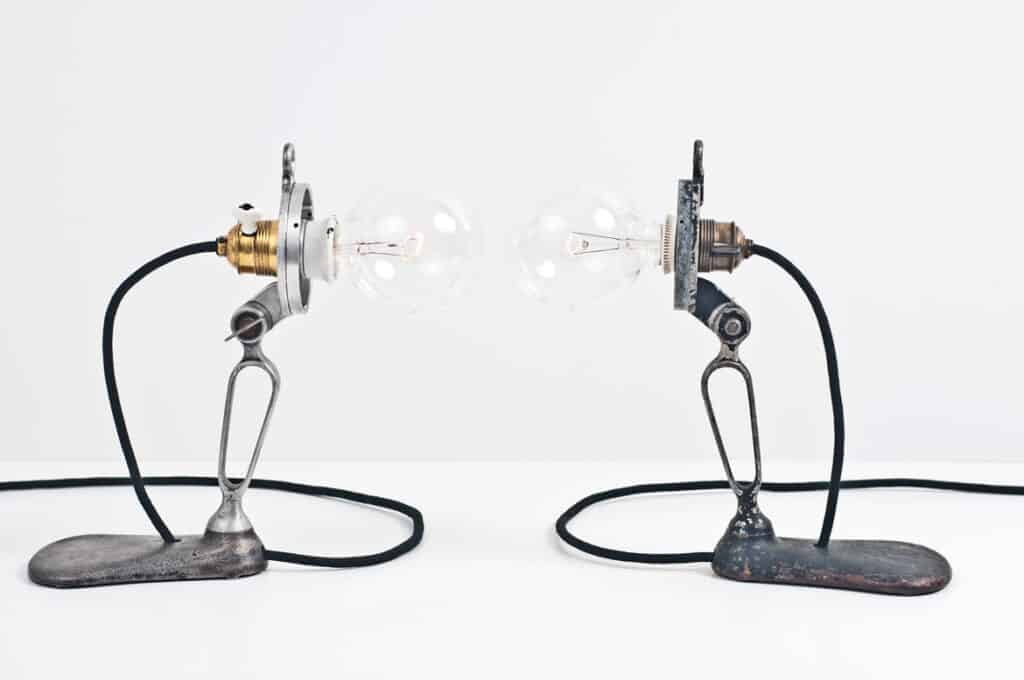 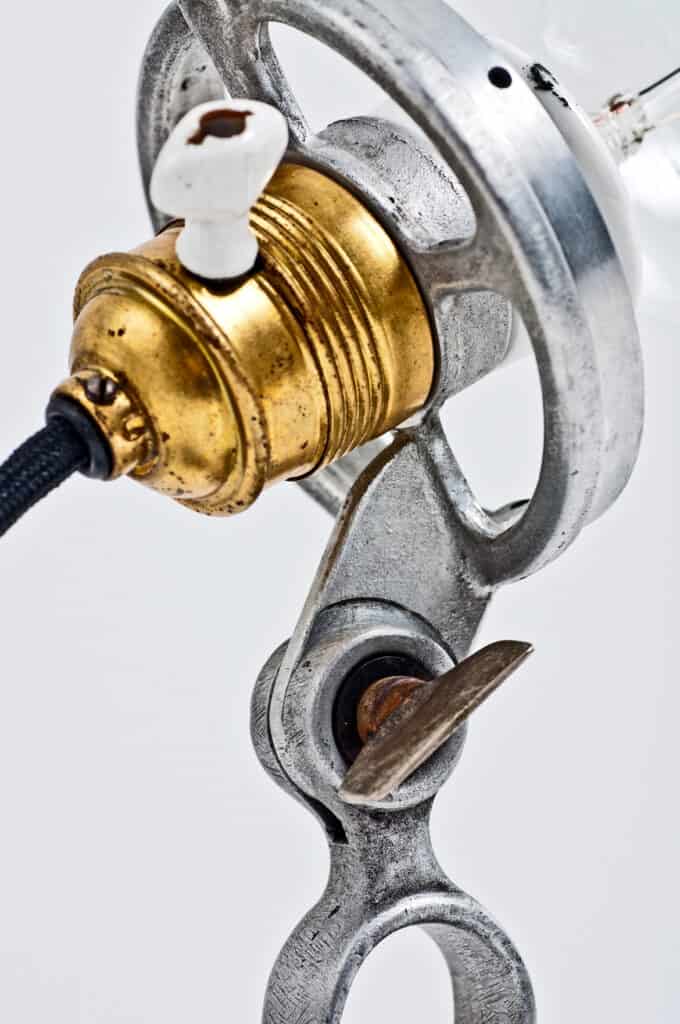 Similarly, “The Twins” were conceived with minimal interference. The remnants of two gas lamps were cleaned and adorned with gold and silver brimmed light globes and fitted with simple brass and steel legs. When turned on, they appeared identical; when turned off, their individuality was emphasised by their distinct metallic detailing. 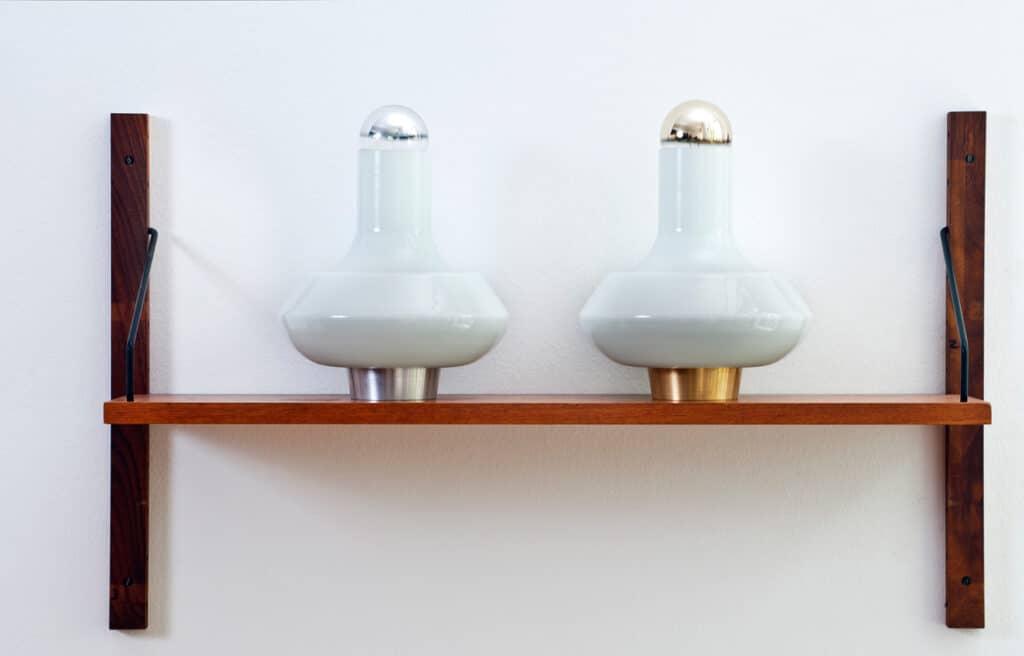 The only solo piece in the collection was “The Satellite”, which was a high-polished glass reflector lamp displayed on a new steel base. Commonly used for retail display in pre-war Europe, it became a symbol of Central European manufacturing, where it was abundantly made and used in the 1950 and 60s.

All members of The Sputnik Collection were found at Ecseri, Budapest’s leading flea market and re-appropriated by Tom Sloan with minimal intervention to commemorate their original beauty and purpose. 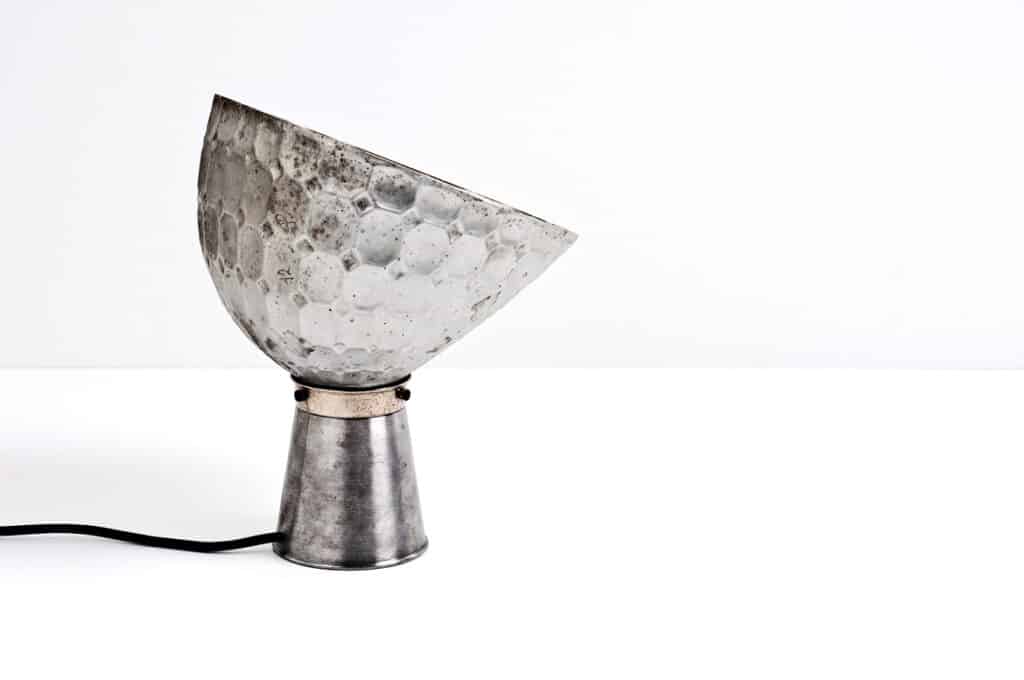 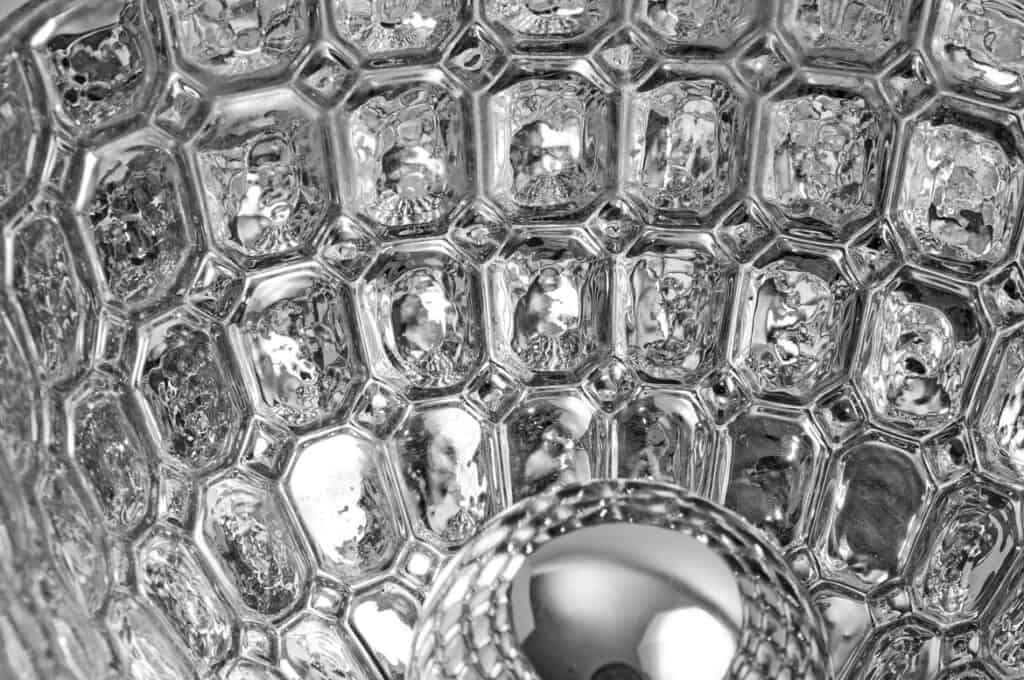 The third and final collection celebrated a heroic and personal anecdote in the myriad tales of Stories from Central Europe. At the 1976 Montreal Olympics a young Hungarian gymnast, poignantly named Zoltán Magyar (“Zoltán The Hungarian”), won gold for a daring move on the pommel horse, which comprised touching down with his hands between the two handlebars.

Unprecedented in technique and style, Magyar received the record score of 10/10 and contributed to the modernisation of a sport originally invented as a training technique for soldiers of the Roman army. Nonetheless, the significance of Magyar’s achievement went well and truly beyond his naming right of the move: “A Magyar Vándor” (The Hungarian Traveller).

At the height of socialism, to excel at sports meant the promise of a better life: international travel, better living conditions and a desirable social status. At the same time, it promoted the public image of socialist Hungary as a young, fit and talented nation. While gymnastics is performed by individual athletes, in a professional competition it qualifies as a team sport and thus also came to symbolise the collective efforts of socialism.

The achievement of “A Magyar Vándor” was multifold: it symbolised Hungary’s position as the central path between the East and West; enviable for its mild form of political authority in contrast to other Soviet satellite states and as the neighbour to Austria, it was the privileged gateway to Western Europe. It also propagated Hungary’s international reputation and from a personal perspective, offered Magyar and his team mates a chance to experience the material world of the West. In honour of this extraordinary story, Blood Mountain poignantly names the central piece of the collection, a custom-made leather briefcase, as “The Hungarian Traveller”. Adopting the wooden handle of the pommel horse, its profile echoed the equipment’s trapezoid shape and choice of tan leather. The bag was designed for the needs of a 21st century urban traveller: customised for a smart phone, tablet computer, A4 notebook, pen and keys. 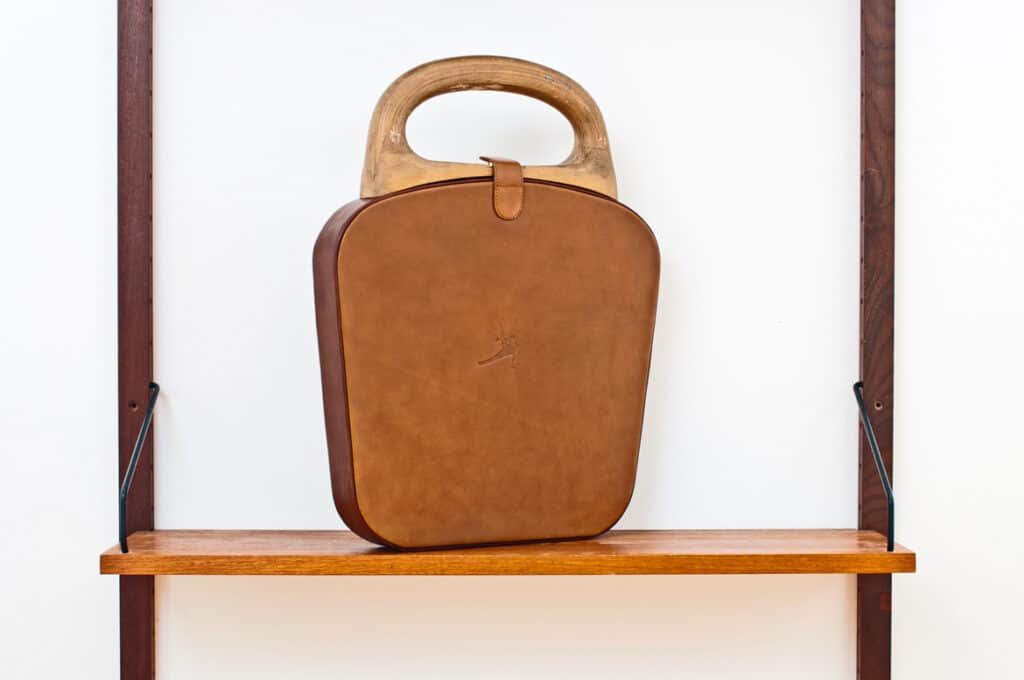 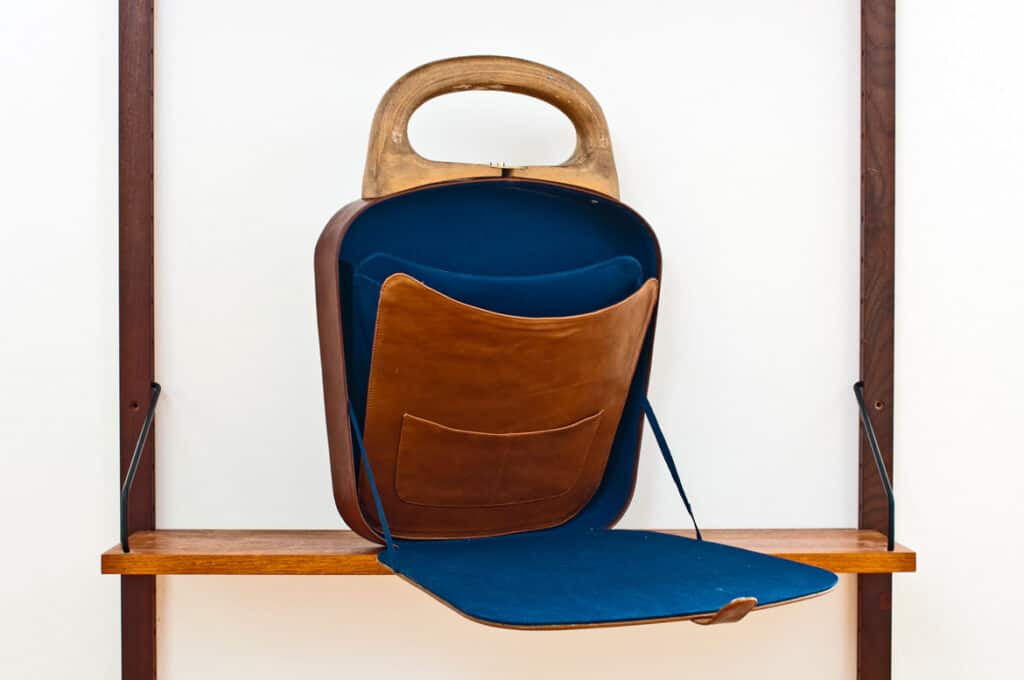 The inner lining was made from a sturdy navy blue linen, the same material that was used for working class uniforms in Soviet times. To commemorate Magyar’s personal endorsement of Blood Mountain’s project, the luggage was completed with an embossed logo of his signature move. For contemporary viewers, this is also a tongue-in-cheek reference to the ubiquitous Air Jordan, the American basketball star’s footwear collection, popular during the region’s heady years of capitalism in the early 1990s. 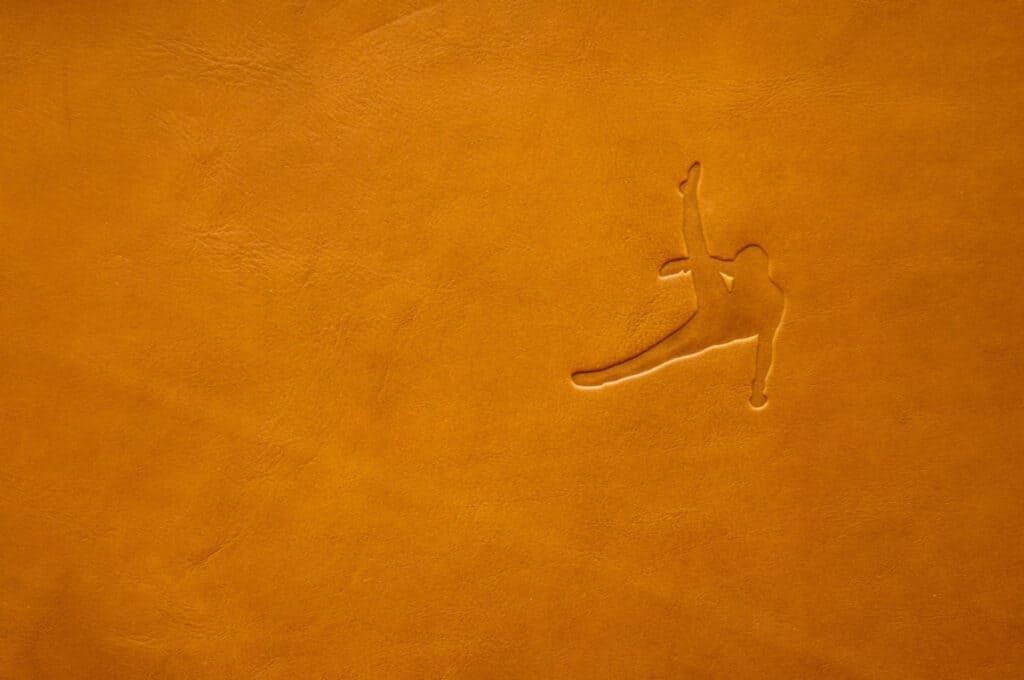 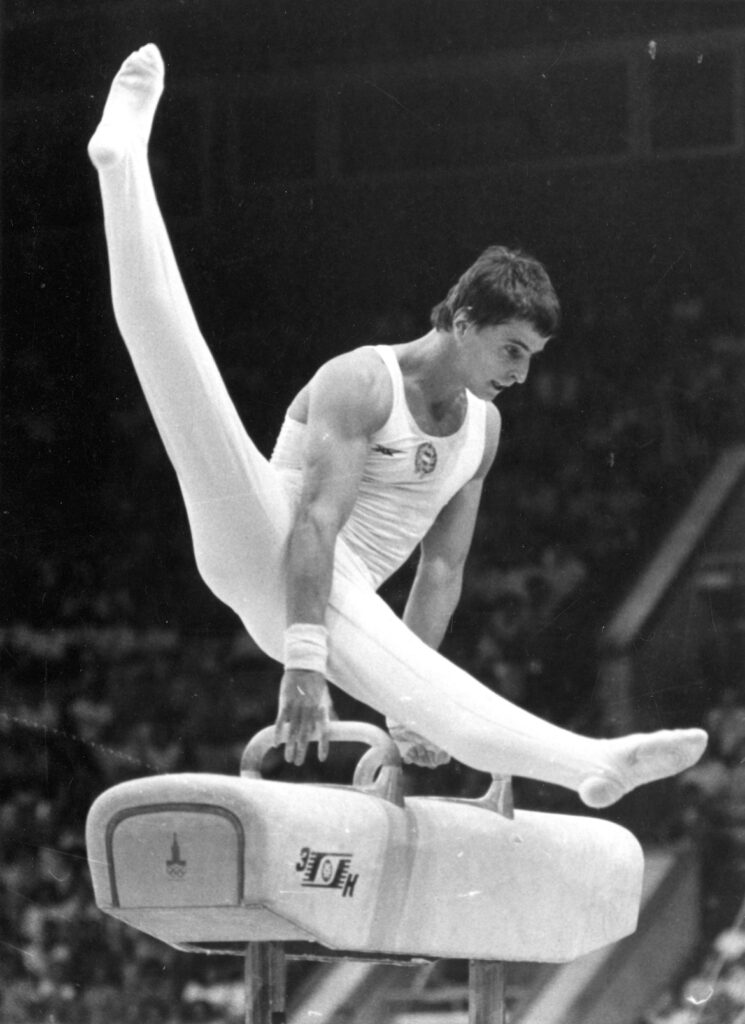 The accompanying bench was an original pommel horse with customised feet and fixtures. Its sole contemporary components were the two buttons, which replaced the handlebars. The object’s attribution as a 1950s Austrian gym horse, mostly likely used in a school and sold as second-hand equipment to Central Eastern Europe in the 1960s to 70s, is attributed by the unused quality of the leather and an engraved love heart. This attribution was made by Magyar’s Olympic coach, László Vígh, an internationally recognised expert in the history and application of the sport, who visited Blood Mountain’s premises. 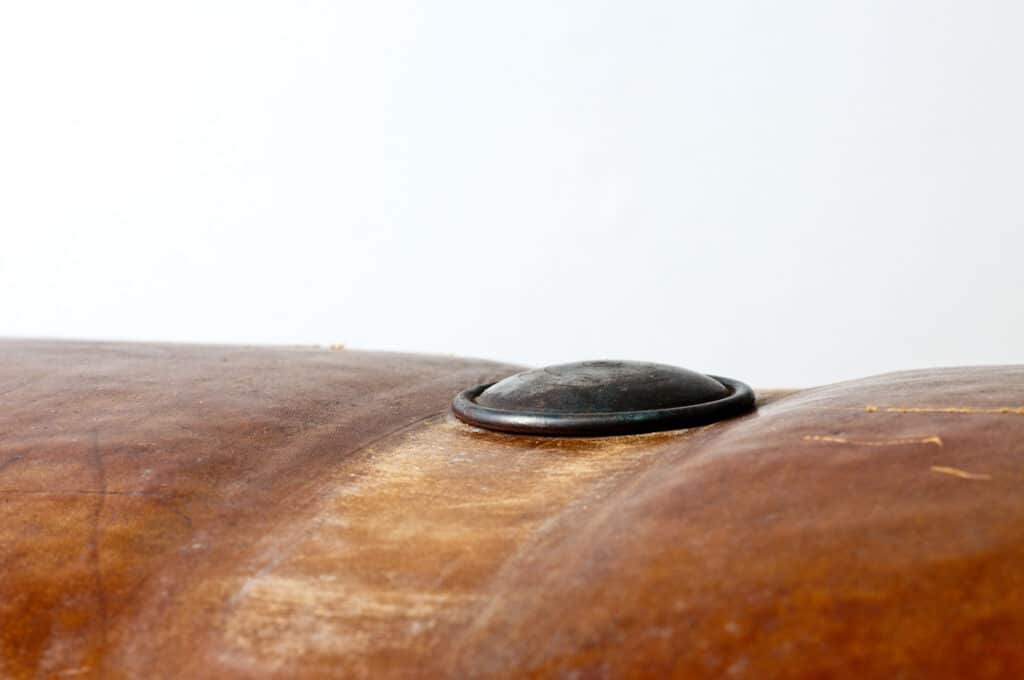 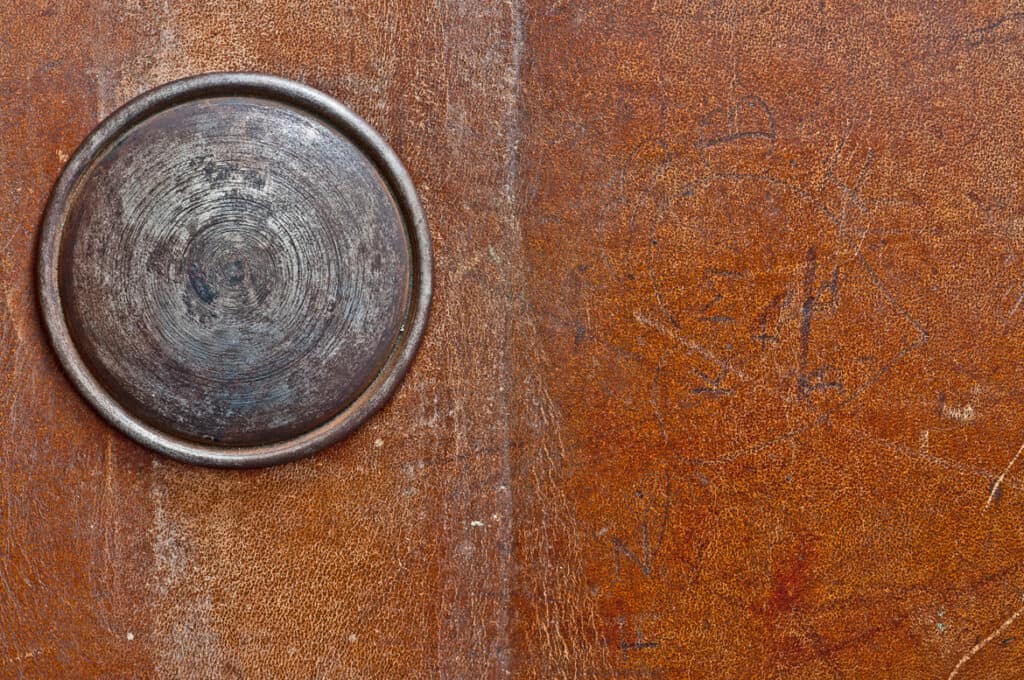 The exhibition display was completed with a line drawing and poster of Magyar’s Olympic moves, symbolising his iconic achievement and the pin up status that athletes are awarded in society, both then and now. 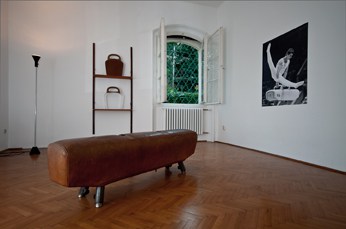 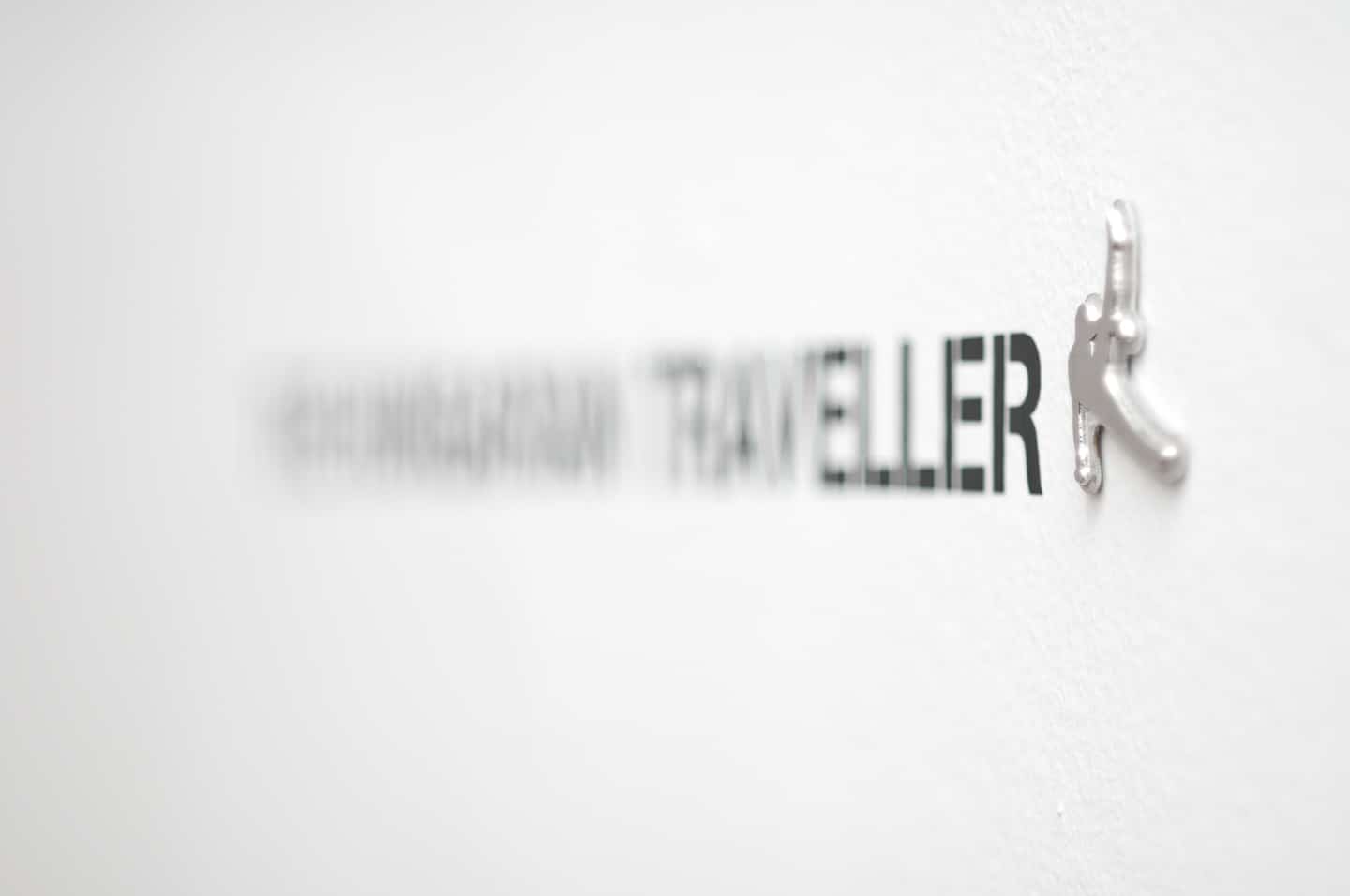 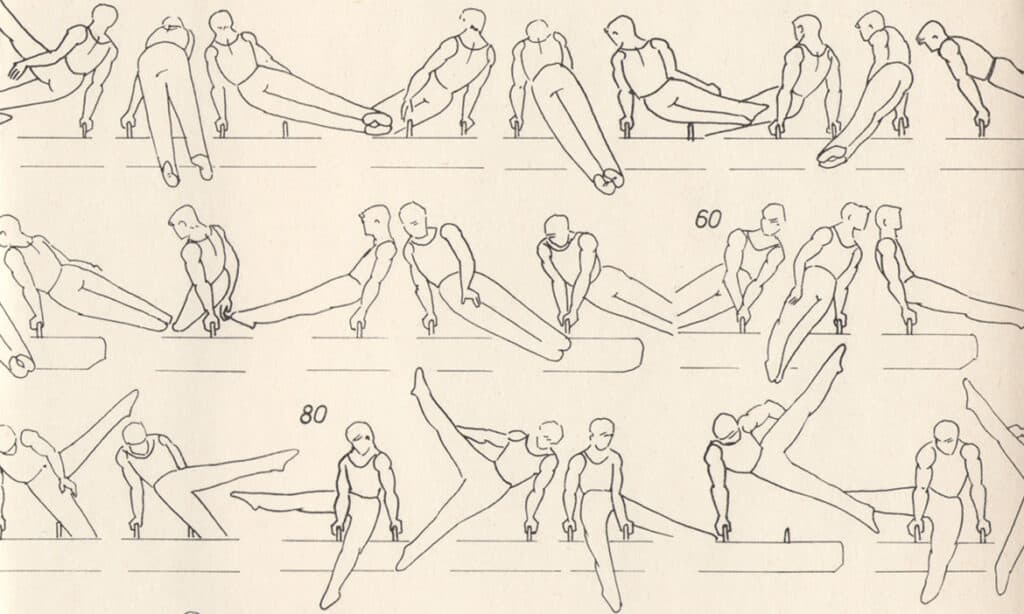 Stories from Central Europe was Blood Mountain’s most comprehensive public programme to date. Two evening talks explored the organisation’s current and future exhibition programme and a series of daytime workshops encouraged professionals, students and the public to engage with contemporary design and technology at a grass-roots level. 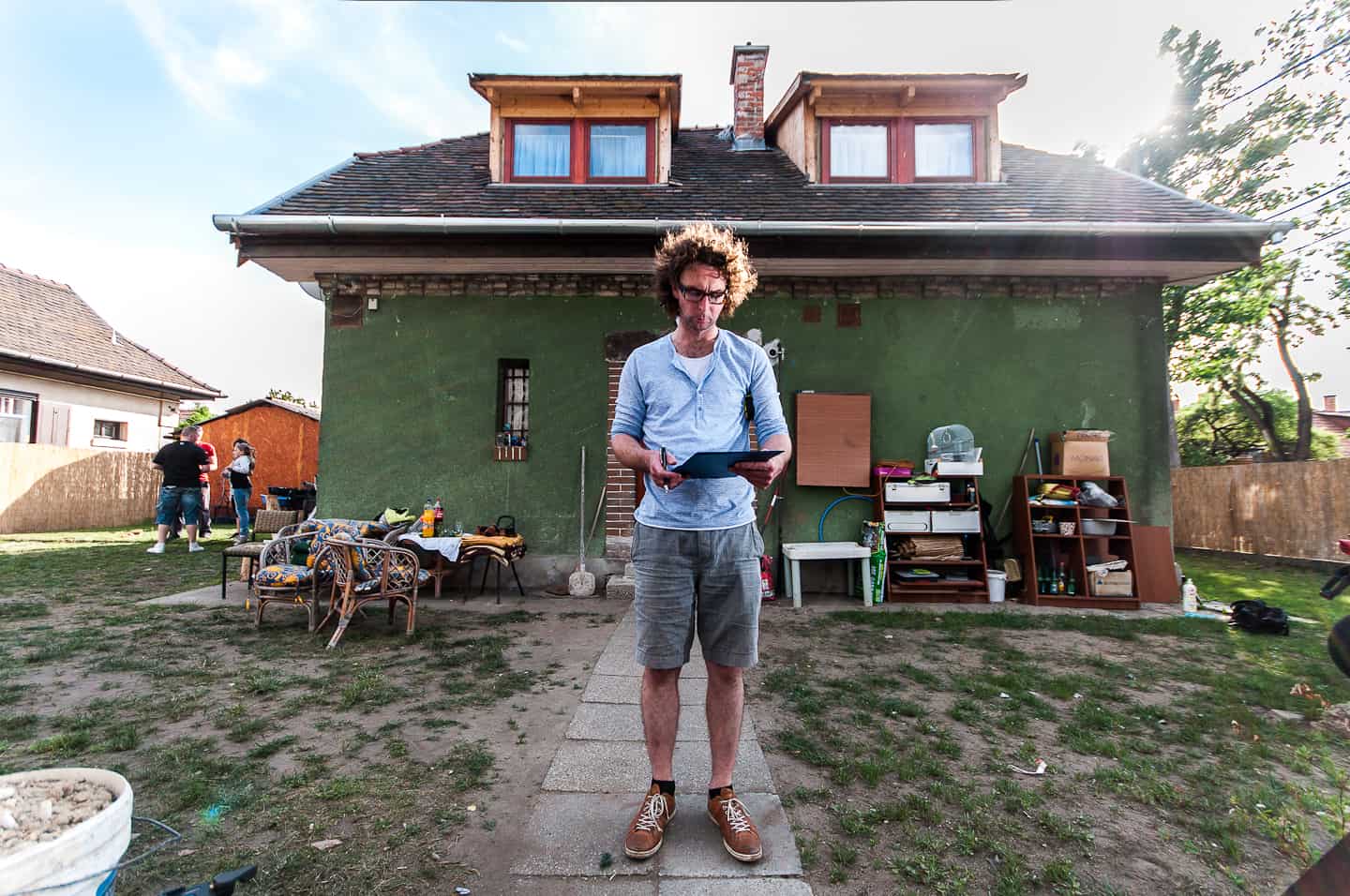 Stories from Central Europe Part 1 was made possible with contributions by:

Produced in association with: